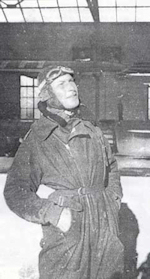 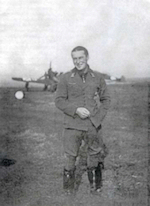 Not too long, but filled with plenty of anecdotes showing disobedience – this is what the biography of only 27-year-old Dimitar Spisarevski looks like.

He was born in the summer of 1916 in Dobrich. In 1919 his family moved to Lom where Dimitar studied until the fifth grade. In 1931, his father Svetozar Spisarevski began working in Sofia and the whole family moved to the capital.

Here Dimitar studied in the 2nd State High School for Young Boys „King Boris III“. In the last year of his studies in high school, he was the flag bearer - a fact sufficiently prestigious for that time to be formally stated in his graduation certificate.

According to Spisarevski's biographers, at that time he was already dreaming of becoming a pilot and in high school he attended an extracurricular class in aeromodelism where together with the other participants he built a model of a glider plane.

Having already chosen his path in life, Spaich joined the military school of His Royal Majesty. He was appointed pilot in October 1936. From April 1938 to July 1939 he was sent to the aviation school in the town of Kaufbeuren, near Augsburg. This was followed by a training at the aviation school in aerobatics in Schleissheim near Munich, and finally a training in the most prestigious school of aerobatics in Werneuchen near Berlin. He graduated with honors.

He returned to Bulgaria in 1940 and was included in the group of fighter pilots PZL 24 "Hawk" as a wing commander in the 2nd Army Air Regiment located near the Turkish border. After a few months only, the World War II broke out. From February 1942 he was already senior instructor in the fighter training school of the air regiment .

In 1943, he was sent to the English Channel, where he observed the German pilots and learned new techniques for guiding air combat. On his return home, he spent some time at the airport in Karlovo as company commander before he was assigned to 3/6 air regiment at the Bozhurishte airport. From there he took off on December 20, 1943 of his first, and last, combat flight.

On December 31, 1943 some 100,000 military postcards with portraits of Spisarevski were printed.

After September 9, 1944 the new authorities imposed silence on him and his heroism that lasted for more than 40 years.